No one who knows me will be surprised that some of my favorite Gospel stories revolve around food and drink, for example, Jesus changing water to wine at the wedding in Cana. Another is the miracle of the loaves and fishes. In this story, Jesus crosses the Sea of Galilee and climbs up a mountain to spend some time alone with his closest disciples, but he has become a popular preacher and healer by now, so thousands of people follow him. But does Jesus get annoyed or set a boundary to protect his private time? No. Instead he asks, “Where can we buy enough food for them to eat?”

In fact, even if they had the money, “two hundred days wages worth of food would not be enough for each of them to have a little,” and besides, they’re in the middle of nowhere! The disciple Andrew finds a boy with five barley loaves and two fish, “but what good are these for so many?” Undeterred, Jesus has the people recline in the grass, blesses the loaves, and starts distributing the bit of food to the crowd. In this impromptu picnic the crowd ends up eating their fill, and afterwards the disciples collect twelve baskets of leftovers!

I grew up appreciating this miracle as an example of divine abundance and generosity, but several years ago I heard a fresh interpretation in a homily. Father Mike thought it likely that the wives and mothers who’d come along on this trip across the sea and up the mountain had brought provisions, but here in a remote place surrounded by hungry people with barely enough to feed themselves, they were afraid to bring out their food. Father Mike suggested that nothing supernatural happened, only that Jesus’s example of sharing inspired the crowd to do the same.

I was a little disappointed at first with this take on the story. Sure, it was plausible, but couldn’t we just let a miracle be a miracle?

I heard this gospel most recently last month, and this time it made me think of my uncle Donald. When I was 24, my dad and I hiked the John Muir Trail, two hundred miles from Tuolomne Meadows to Mt. Whitney. To keep our packs bearable, we arranged with my uncle to meet us at a halfway spot where the trail came within a few miles of a road; there he would resupply us with freeze-dried food for the rest of our trip.

In the solipsism of youth, I didn’t recognize what a generous act this was on Donald’s part, to spend several hours driving to a remote point in the Sierras to deliver supplies and camp one night, then drive several hours home again. My father did, though. Early on the appointed morning he got up early and hiked out to the trailhead to meet Donald and carry our food back to camp.

Later my dad recounted his surprise at how bulky Donald’s pack was. Here was an experienced backpacker out for just one night, yet he looked to be carrying sixty to seventy pounds of stuff. All became clear, however, when they arrived at our campsite on the south fork of the San Joaquin River, and Donald pulled out three personalized mugs along with a mini keg of beer. My uncle the teetotaler had brought us BEER! For ten days we had drunk nothing but freeze-dried coffee, instant cocoa, and water purified with iodine tablets. Now we sat on the riverbank, dangled our feet in the cool water, and drank beer. 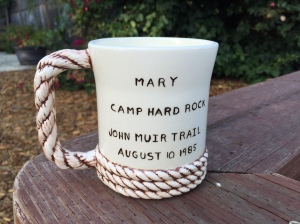 But that was not all. Next a mysterious smoky parcel emerged from Donald’s pack: a quart of mocha almond fudge ice cream packed in dry ice! I cannot describe the bliss. Ten days of freeze-dried food, and now ice cream! For dinner we ate steak and a green salad, for breakfast bacon and eggs and cowboy coffee. Feeling like fattened bears that morning, Dad and I bid my uncle farewell and continued down the trail with our laden packs. Nine days later we would climb Mt. Whitney and complete our quixotic adventure.

In 2001 Donald was killed in a car accident. The night before the funeral family and friends gathered for dinner with the minister who would perform the service, and because he hadn’t known my uncle, he asked us to share stories about him. Of course, I knew immediately the one I would tell. I was not alone, though. One after another, relatives and people I didn’t even know related similar incidents, not just nice things Donald had done for them, but acts of crazy, over-the-top kindness. It turned out that profligate generosity was the theme of his life.

My disappointment with Father Mike’s interpretation of the loaves and fishes miracle has long since faded, and I’ve come to appreciate what a wonder it is for humans to overcome our greed and fear of not having enough. Uncle Donald inspired me by making it seem like an everyday occurrence.

Mary Camille Thomas is a native of Santa Cruz, California who considers herself lucky to be back after living in Davis, Germany, Los Angeles, Holland, and on the road in a motorhome. She is a librarian by profession, and her poetry has appeared in the Porter Gulch Review and Sisters Singing: Blessings, Prayers, Art, Songs and Sacred Stories by Women. She is is currently working on a novel called Schatz and a collection of poems of the spirit. View all posts by Mary Camille Thomas