In the fifteen years since the first iPhone was released, reaching for our smartphones has become a cultural habit. Whenever we feel the least inkling of boredom — standing in line, sitting in a waiting room — out comes the phone. I do it too. I like instant relief from that restless ennui, but sometimes I wonder what I might be losing by trying to avoid it.  In fact, I originally planned to title this post “The Benefits of Boredom” and explore how it might encourage creativity. “The idea has an intuitive appeal and an illustrious history,” Margaret Talbot admits in an essay in the New Yorker, but then she quickly cites researchers who “say there isn’t much empirical evidence that boredom unleashes creativity.”

Yet during each tech sabbath, as I unplugged from my pandemic habit of listening to a podcast or audiobook when I went for a walk, I gradually recognized that my inkling was right. I was missing out on something: not boredom maybe, but the opportunity for reverie.It might seem like I was doing it all when I strode out with Airpods in my ears – exercising and absorbing Vitamin D while also indulging my love of literature – but I was giving up that dreamy and delicious mindset of looking up at the sky to find shapes in the clouds. I was sacrificing my own thoughts for someone else’s, for at its best reverie becomes a kind of sober intoxication conducive to deep and imaginative thinking. At the very least it can lead to rest and relaxation.

I used to judge people strolling along the ocean with a phone in their hands, but my AirPods made me one of them. I might be enjoying an entertaining novel, but I didn’t notice the sea otter frolicking with her pup. Forgotten was the Latin phrase I once claimed as a motto:

It is solved by walking. For me, solitude combined with the easy stride of my sturdy legs in the outdoors is a brain tonic. The “problems” I solve might involve mentally rehearsing a presentation for work or pondering the next line of a poem I’m writing, considering a decision as major as when I should retire or as mundane as what to have for dinner. I might just daydream.

Not that listening to a podcast or audiobook is a bad thing, but I can save them for the gym or my commute. Which reminds me of another Latin phrase, modus omnibus in rebus, moderation in all things. Mentally removing yourself from your environment may be okay when your environment is a tedious line at Safeway, but loss occurs when it becomes a mindless habit. Take time out from your devices to think your own thoughts and indulge in reverie! Pausing the constant stimuli from tech makes it possible for you to listen more deeply – to birdsong, your loved ones, the voice of the Divine. It might even make room for a creative spark, and who knows where that will lead? 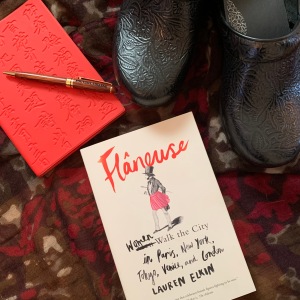 I found Lauren Elkin’s book Flaneuse in the travel writing section of Bookshop Santa Cruz, but it is pleasantly hard to categorize: part memoir (a young woman leaves suburbia for the big city and eventually a life abroad), part musing on culture and feminism, part travelog. As any francophone could tell from the title, the focus is on walking. I don’t alas speak French, so I needed Lauren Elkin’s translation of flaneur: one who wanders aimlessly. She concentrates on the woman walker, the flaneuse, whom she defines specifically as “a determined resourceful woman keenly attuned to the creative potential of the city and the liberating possibilities of a good walk.”

Elkin herself fits this definition, and so do the women she writes about in her homage to the cities of New York, Paris, London, and Venice, to seeing them on foot, as a woman. (She writes about Tokyo too, but her relationship with that city seems as fraught and unfortunate as her relationship with the man she followed there.) Because my bent is towards literature, I especially enjoyed the chapters about Virginia Woolf in London and George Sand in Paris in which Elkin skillfully blends their relationship to those cities with her own, mixing literary reflections with travelog and memoir.

That doesn’t mean, however, that I didn’t also appreciate her forays into art, history, and politics. Reading about revolution and the history of the protest march in Paris, I found an explanation for the impulse that pulled me into the streets of Santa Cruz on January 21, 2017 even though I wasn’t sure what difference the Women’s March would make. “Marching is an instinctive response to feeling wronged, or desperate, or compelled to make a statement,” Elkin writes. I felt all three of those things after the 2016 election. “It makes us feel stronger to be part of a group,” she continues. “It feels good. Marching is a political act, but it’s a social one as well. We … feel we belong to something bigger than us.” I marched that day with my mother and my sister, friends, neighbors, and strangers, while my best friend joined over 470,000 people in Washington, D.C.  and millions marched around the world. It did feel good, but Elkin recognizes the risk too. She describes participating in a march in Paris that splinters when the police block the street. She inadvertently follows a group of anarchists and ends up as part of a mob. “I felt uneasy. It was too easy to be led who knows where, by who knows whom, to do who knows what.” Her accidental experience stands in sharp contrast the mob that overran the Capitol on Wednesday. The insurrectionists might think that Trump led them there to stop the certification of an election he falsely claimed was stolen, but I can’t help thinking how satisfying the sight of that rampage on the house of the American people must have been to anarchists everywhere. 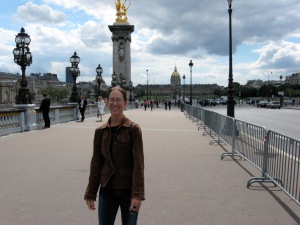 My motto is solvitur ambulando, it can be solved by walking. Like Martha Gelhorn I find flânerie “as necessary as solitude: that is how the compost keeps growing in the mind.” But I’m not a city person. Although I’ve meandered happily in Paris, London, Istanbul, and New York, in truth the city quickly becomes overstimulating for me, oppressive even and exhausting. I have to retreat to a hotel room to recover or better yet to the country where I can walk a quiet lane or a path in the woods. Yet Elkin managed to sweep me up in the romance of flaneuse-ing around a city, and maybe precisely because the pandemic has put it out of reach, I now fantasize about flying to Paris with a pair of comfortable shoes and my notebook. Paris is where Elkin has made her home and the city she writes most about, a city whose streets I too have wandered many times over the last forty years, with friends and sweethearts, with my sisters and by myself, so I’m seduced equally by Elkin’s evocative writing and my own memories.

“There is a sense of the city you can’t plot on a map or a phone,” she says, and I long for that elusive sense, to roam aimlessly, to trust where my feet and chance might take me. What would I observe this time, “keenly attuned to the creative potential of the city,” as I strolled through the Marais or the Luxembourg Gardens? When I got tired and overstimulated, what would I write as I sat in a café people-watching and drinking café crème?

Yet here comes my inner realist to rein in the romantic. It’s January, the weather is miserable, maybe I’ll wait till summer. For now, I’ll sit with a notebook here at home, enjoying the view out my window of the winter garden and armchair traveling with an accomplished writer who knows how to share “the liberating possibilities of a good walk.”